What a World Cup full of surprises ! We have seen several soccer giants leave early…exit Spain, Portugal, Germany…but hey we are still in the running for the title ! Belgium believes !

On june 23th we had the opportunity to watch the game Belgium-Tunisia in the VRT studios in Brussels ! We were all excited and watched our team win the game with 5-2 ! The tone was set !

I also had the chance to talk about my mental coaching project with Sporza’s tv anchor Carl Van Nieuwkerke !

Then there was the thriller against Japan with the finishing goal in the last minute. It gave our team a boost ! When they asked Kevin De Bruyne what the Devils were planning to do against Brazil, he was very confident : “We are going for the win !”

The non-believers and pessimists told us we didn’t have a chance…but we knew better : Anything is possible ! What seemed to be a challenge turned into a piece of cake ! Our devils had their wings on and Neymar and his friends were chanceless against a strong  Belgium.

Result : yelling and screaming supporters, tears of joy and lots of beer afterwards…It was a long night 🙂 Some woke up voiceless, some with a serious hangover but all extremely satisfied !

Tuesday evening the crowd will again support our team from every corner in the country, at home with family and friends or in the several soccer villages where you can watch the game on screen.

Watch out la douce France for the Belgian wrecking ball ! We have smelled the victory and are going for it !

It ain’t over for our boys. It ain’t over till the fat lady sings ! I am sure Belgium plans to keep her quiet till our team comes home with the Cup ! 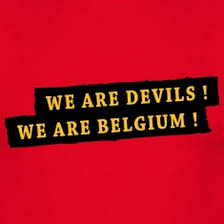