I can’t imagine life without cats. I got my first one when I was only three years old. It was a black female named “Pussy”. She was my comfort in times of need and I told her all my secrets when I was a child. She left this earthly plane when I was 23 years old.

When I was married I got a call from a friend who found a dumped kitten close to her house. Her dogs were too agressive towards her so she asked me if I would be interested in giving her a nice home. I agreed immediately. 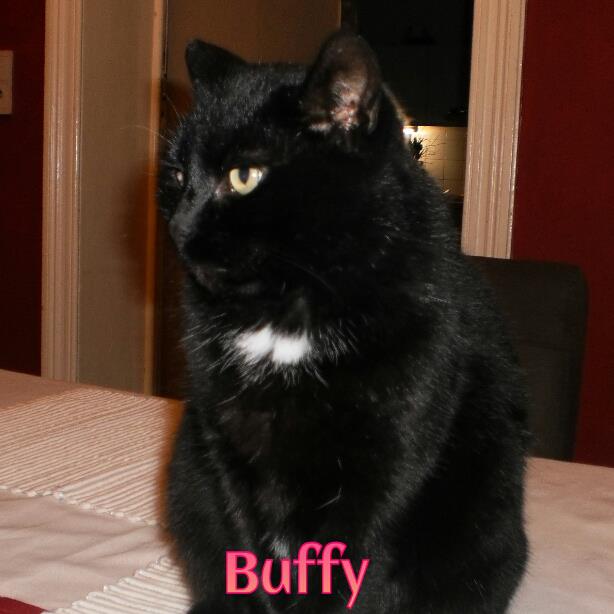 Years later (and me already divorced), she was very distressed and jealous when she met my boyfriend. While he was sleeping on the couch or was lying next to me in bed, she would strike him on purpose, without my notice ! Useless to say she was worth her name of a vampire slayer ! Even though Buffy stayed small as an adult, she definitely was the terror in town for other cats !

Diva was the second kitten we adopted. She was the one with an attitude ! She was really bossy and she could throw up a tantrum when she didn’t get what she wanted ! But she was very attentive whenever someone felt sick, she would come sitting on our laps and comfort us. She loved giving eskimo kisses too.

She always came home with presents in the form of leaves, whenever she came in the house, loudly meowing we knew she found a new one. My son collected them all in a shoe box !

Diva gave birth to two lovely kittens june 2011 : Minouche and Modjo (M&M !). They were so adorable that we decided to keep them. Buffy had already passed away. So there we were with three cats in the house. 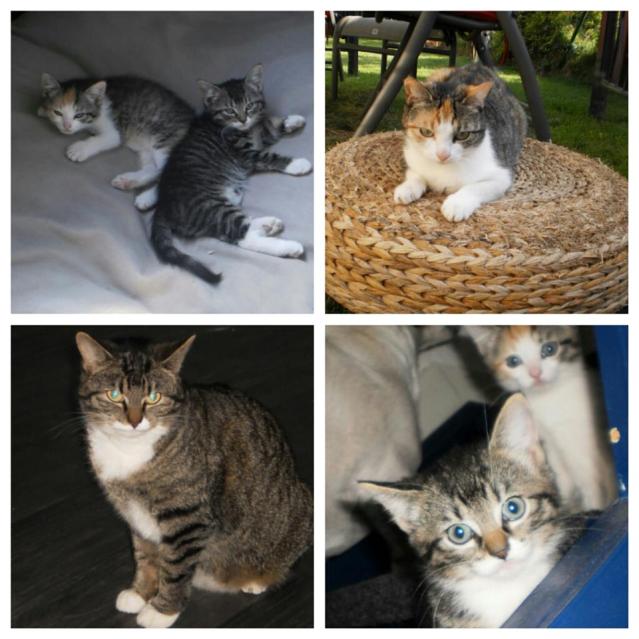 We were about to neuter her shortly after she gave birth, only to found out it was too late, she was pregnant again ! She had a huge belly this time and we were all curious how many kittens she was carrying.

She gave birth to these kittens at her usual place, a tiny dark spot under our staircase. Luckily we were all at home when she was in labour.

Then my son shouted : “Mom there’s another one !” I thought he was joking ! But there was number six. I felt I was going to faint ! We suddenly had 9 cats in our house !

When we saw she gave birth to three ginger cats…we immediately had a suspicion who the father could be. We live next to a garden center, where a male ginger greets the clients, sitting on the counter next to the cashier. Everytime I enter the store to buy plants I say hello to “dad” now 🙂

The only male of the three gingers was adopted and went living with my ex-husband, my son was still able to see him in the weekends and named him Garfield. The two ginger female sisters Lulu and Bolleke who stayed home, became inseperatable.

We neutered all cats this time ! We were too anxious to give them up for adoption so we again decided to keep them, one big happy family together !

Sadly enough Diva and Minouche dissapeared, never to come back again, leaving us all devastated, wondering what happened. 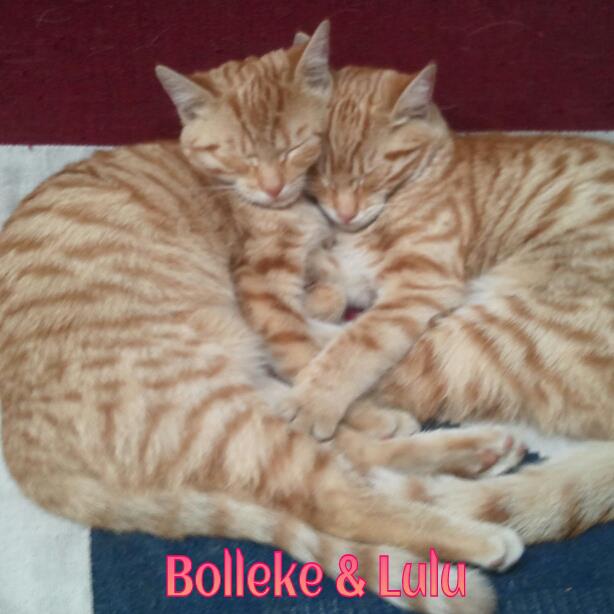 I let the other seven introduce themselves :

Bolleke : “I think I am a dog. I studied the dog’s manners very well so I can apply the same techniques as him to get some extra food. I am an expert in begging and I can annoy everyone when they are eating. I like to stay close to my mom. When I had to undergo surgery and was recovering at home, she slept on the floor next to my bench for two weeks !”

Lulu : “I can talk human very well and I use my voice whenever I need something from my humans. When my humans start petting me, I look like a dj scratching records !”

Gibbs. “I am the boss of the cat family and the wife’s guardian. Everything goes according to my rules. I don’t allow any strange human male next to my human mom. They need my approval ! I am fascinated by flames and I can watch them for hours. I need my drinks on tap !”

James : “I am the favorite of Keith, my human brother who I consider my boss. Named after 007,  I am as adventurous as James Bond. I got lost for three weeks during my boss’s exams and got the whole family freaked out. The local police department even spread my missing message on Facebook and my human mom asked help from a shaman in the United States to get me back out of “primal mode” so I could return home safely. I managed to return to my boss’ s bedroom, badly injured (my humans don’t know what caused it). The vet had to amputate my tail and I still have difficulities walking but I am happy to be home again !

Louise : “I am the last born of six and I was the smallest of the litter. Sometimes I feel an outcast because Gibbs doesn’t like my presence and chases me away. He gets grounded every time my human parents see it happening. I love my human mom very much because she gives me a lot of attention. She calls me “my sweet Louise.” I am the one responsable for giving her “feline paralysis”. I look very much like my birth mom Diva.

Modjo : “I know I am the only chubby one of the family. I like to withdraw to quiet places to rest and to take long naps, but once I appear you can’t ignore my demands for attention. I love receiving hugs !”

Hartemie (Sweetheart) : “I was living on the streets for weeks and I was obliged to beg for food. A nice lady with curly hairs brought me some food now and then, but I couldn’t stay home with her. I knew that particular sunny sunday would be my lucky day, I could sense it ! She was having a housewarming party and her niece was there too. After the niece met me and heard my story, she was very touched and emotional and at the end of the evening she decided to take me to my forever home ! She says that I was God sent and that leaving me on the streets would have her heartbroken. The other cats have accepted me as one of theirs. My name is Sweetheart because I have a spot in the form of a heart on my nose. My mom says I am very clever and sweet !